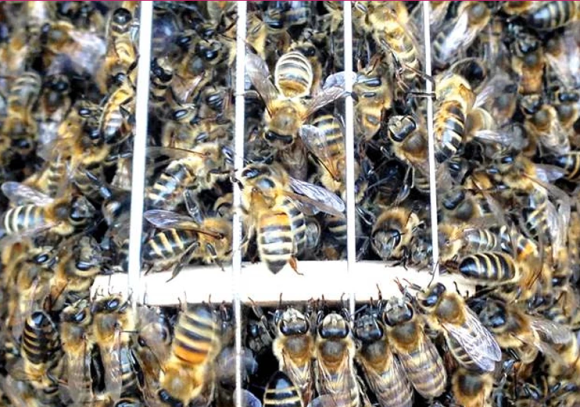 On Friday Caught by the River are releasing their first LP by Be titled ‘One.’

This four-track album imagines the sound of British summertime as heard by one of the most important members of the animal kingdom – the bee. A hypnotic conceptualisation of the life, work and living environment of the bee, “One” is a truly transcendental record – think Spacemen 3 recording a series of 21st century outdoor ragas for Touch Records and you’re somewhere in the right direction.

“One” is the soundtrack to artist Wolfgang Buttress’ multiple award winning UK Pavilion at the 2015 Milan Expo – an installation that highlighted the plight of the honeybee, focusing on the importance of pollination. The music on the record is a constantly changing and evolving symphony – the sound of a dialogue between bee and human.

The album was recorded by musicians Kev Bales and Tony Foster – a duo known for working with Spiritualized, Julian Cope, Dave Gahan and Mark Lanegan, amongst many others. Other musicians featured on the record include Jason Pierce, Youth, cellist Deidre Bencsik, vocalist Camille Buttress and Amiina (the string section regularly used by Sigur Ros). The recording sessions saw musicians improvising in the key of D along to a live audio feed of beehive sounds. Piano, Mellotron and lap steel were overdubbed later. The result is a unique piece of truly meditative music.

Read an interview Wolfgang Butress over at The Guardian.  Plus, The Guardian are also streaming the album ahead of release here.

There’s limited tickets left for the two up and coming shows at Nottingham Arts Centre on February 18th & 19th.

Purchase Be:One over on Bandcamp.